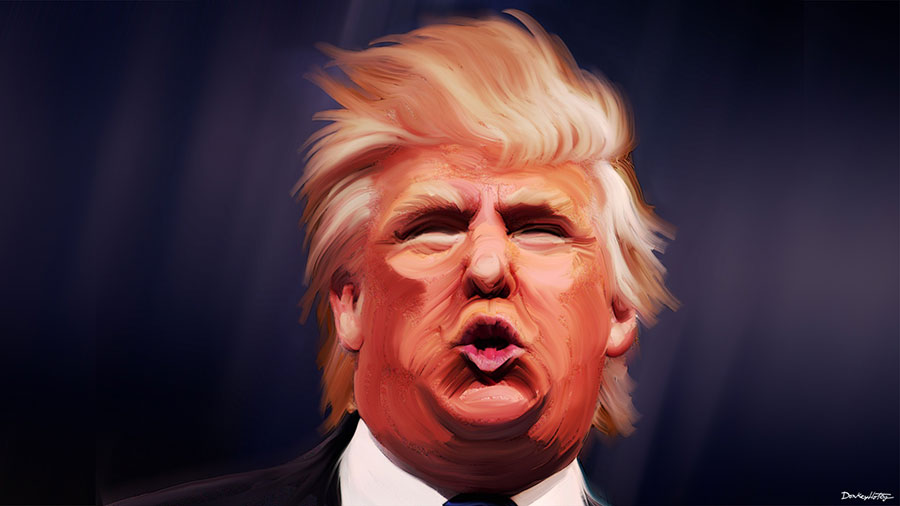 Here are the Top 10 Reasons Why We Are Doomed in order of doom potential. These all happen to be things that President-elect Clown has done since the election.

1.) He called Vladimir Putin six days after he was elected, before he spoke to the Pentagon, and he did it off the record. Since Putin wants to re-form the Soviet Union and invade the Baltics, this incident will go down in history as the moment. The moment that led to the fall of Eastern Europe.

2.) He announced that the man in his ear – no, not the Trump Whisperer Jared Kushner, the other one – will be the founder of a very popular conspiracy-theory driven website. Since it is legal for the United States government to use propaganda on its citizens as long as it’s already available information, I’m sure this won’t turn out bad for us.

3.) He appointed Michael Flynn as National Security Advisor, a man who also believes in conspiracy theories. He is the one who gets to sum up all the information from the intelligence agencies and then explain it to the President. I think his report everyday just might continue to be “the Muslims are coming to get us” – fantastic.

4.) Trump’s creation of the Presidential Transition Team Executive Committee so his family can continue to be by his side. This is more evidence that he does not know what he’s doing, he’s scared, and he’s lonely. Those are promising traits in a leader.

5.) Complaining about the First Amendment to the Constitution of the United States in his first tweet to the nation as President-elect by saying the protesters were paid and that it was unfair. The fact that he softened that statement later with another tweet just shows that Kellyanne or Jared told him what he did was bad, which is not inspiring.

6.) Reaching out to known conspiracy theorist Alex Jones to thank him for his support – before he called Vladimir Putin. Which was before he called the Pentagon. Is anyone picking up on a theme here?

7.) Saying that he will not stay in the White House on weekends and that his wife and child will not live there at all – another sign that he is not committed to doing this job as best he can, but simply to “powering through” the job as President to achieve his obvious goal – being the most rich and famous man on Planet Earth.

8.) Floating Cabinet appointment ideas that reflect total conservatism, a return to the policies of the 1950’s, and an unwillingness to work with the other side. Now, if you’re a conservative you might think that is great, but imagine a Democratic Senator upsetting Donald J. Clown, say, Elizabeth Warren while she is speaking on CNN. If she makes him mad enough, you better be ready for the government to get shut down over it.

9.) Summoning a bunch of corporate media types to a closed-door meeting where he insulted them and told them they are all liars. So which is more disturbing – that he called the media a bunch of liars or that the media agreed to an off-the-record meeting?

10.) Every tweet that he has generated since he was elected. They are all cause for great alarm, so I am sounding the alarm.

To all the people who say that we should not be complaining because Donald Trump hasn’t done anything yet: Fuck you. He has done a whole lot in the last two weeks, and all of it has been bad. See list above.

To all the idiots who are happy that Trump won: Fuck you. Unless you own a lot of stock in the oil and gas industry, I don’t understand why anyone is happy that Donald Trump got elected. I keep hearing regular Trump voters express happiness that we’re finally going to take care of the illegals. Oh yeah, somehow illegal immigration is important to you morons NOW, even though I’ve seen my fellow white people get rich off of hiring Mexicans at dirt cheap wages since I was a child.

To all the people who say that we should not resist the Dark Side and to go on with our lives as if nothing horrible has happened and this is all normal: Fuck you. That’s what I was doing all this time for the last two years – don’t you see? That’s what we ALL WERE DOING – NORMALIZING TRUMP. IT HAS TO STOP.

To the producers, writers, and hosts at MSNBC who have reacted as if this was normal Democracy in action ever since election night, and to the other television media people who agreed to an off-the-record meeting with Trump to set the ground rules for access: Fuck you. How can you not see that he is in the process of stifling the First Amendment? He has clearly outlined his plans for loosening libel laws, he insulted you to your faces, and now you are cowering.

To the Democrats who are poised to work with the Trump Administration on an infrastructure bill or tax reform bill: Fuck you. Neal Gabler just wrote an article (the most depressing one yet) that Trump will be a popular President and will be re-elected. (He also declares that freedom of the press died with this past election.) I really don’t want that to happen. If the Democrats decide against opposition, against Resistance, then we all know that the jig is up and they are all in this together because that is FUCKED. We’ll know that the corporate media outlets got rich off of us idiots, and so did the politicians.

I am not being a crybaby, I’m fucking pissed. I’m sounding the alarm about the arrival of fascism in America because it is my duty as a citizen to do so. And I will keep shouting this to anyone who listens and into your fat bloated orange face, Mr. President-elect, from now until the day you are gone.

I will join the Resistance. I will not cry about it.